Before getting into anything else, I want to share a great joint interview I did with my collaborator – horror legend Tamara Thorne – at Gingernuts of Horror. We covered everything from horror, erotica,  ghost hunting, and photography to our solo works, our process, our plans, and a bit about a future novel we haven’t discussed until now. Thank you to everyone at Gingernuts, for the fun and unique questions. Tamara and I had a good time with this one.

Also, next Thursday, April 17th, at 8:00 pm EST Tamara and I have a LIVE interview at Authors on the Air with Pam Stack that we’re very excited about. I’m not especially keen on live interviews as I find any kind of public speaking worrisome, but Authors on the Air is a considerable force that you don’t say no to! The show is about an hour-long and we’re looking very forward to it. I am usually only nervous about these things beforehand. Once the show starts, I’m sure I’ll be fine, so tune in and give us a listen. It’s sure to be a good time. As soon as I have a link to the show, I will post it in all the post-able places. 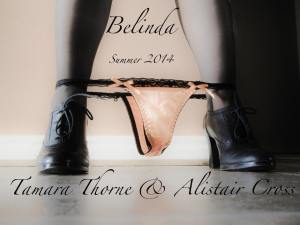 (A promotional poster for Belinda)

In the meantime, the writing is going as strong as it possibly can. Tamara and I have been spending anywhere from six to nine hours a day, five and six days a week, developing setting, establishing characters,  composing plot, and polishing finished content. Our hands are full and we’re doing a bang-up job of juggling tasks, but we’re also having the time of our lives and are getting more excited every day to get our creations into readers’ hands.

Grandma’s Rack is in the final stages and once the last few scenes are completed – which will be done within the week – we intend to let the manuscript sit for six to eight weeks till we can return to it with a clear perspective before doing a final rewrite. Then it still has to go to the editor, back to us for any needed modifications, then finally, to the publisher. As soon as we have it ourselves, the release date will be revealed.

Belinda is plowing along and full-speed. As per our publisher, Tamara and I have creative control over the cover art for the various installments and promotional material, so for the first time, I’m putting my years of photography experience to good use. The first photo session was last weekend, and there’s another one this weekend which will include one of the male models we’ve chosen. Also, I eventually want to revisit Billy the Serpent, as he was easily one of the most natural and photogenic creatures I’ve ever had the honor of capturing with my lens… so watch for further images of him as well as his beautiful human counterparts. A great big Thank You! to Avalerion books for allowing us the artistic freedom to pursue our vision of the Belinda series. 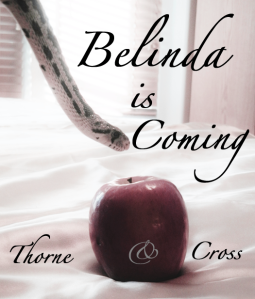 (A promotional photo for Belinda)

And speaking of Avalerion, I just received my copy of A Mortal Glamour by living legend Chelsea Quinn Yarbro.  Chelsea Quinn Yarbro is a veteran horror author and very good friend who has several books being released through Avalerion. Between her, Gryffyn Phoenix, and Tamara Thorne, I am very good company and can’t express the gratitude I feel to be grouped with these great, great pros. Anyway, I have a lot of reading to do this summer and intend to get started on it within the next few weeks, beginning with A Mortal Glamour which I’ve already taken the confident measure of adding to my list of  all-time Favorite Books.

(A Mortal Glamour by Chelsea Quinn Yarbo. And yes… that’s a blurb from Stephen King at the top!)

Lastly, we created a logo for the Cross & Thorne collaborations. We call it The Glass Apple and we love it dearly. You will be seeing this – and possibly, variations of this – on our upcoming projects.