After Chelsea Quinn Yarbro’s April 23rd visit to Thorne & Cross: Haunted Nights LIVE! we got to thinking about all the different types of vampires that are lurking out there. This week, on June 23rd, we will be talking to Laurell K. Hamilton about her vampires’ foibles and how they differ from Yarbro’s and Stoker’s, and when Charlaine Harris visits on August 6th, we’re looking forward to getting her take on vampiric habits, as well. 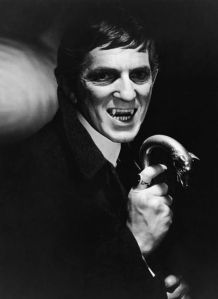 Today’s vampires are the descendants of a long literary history and as writers in the horror genre, we wanted to brush-up on our vampiric knowledge. We were continually surprised, perplexed, and in some cases, annoyed by the ever-evolving vampire archetype. In our travels, we’ve come across some of the most fascinating vampires out there. There’s too much information to include here, so we’ve decided to see what some of the most popular modern vampires do and do not have in common.

The first European vampires were simply fanged ghouls, bloody and corpse-y, with ruddy dark complexions. Sometimes they cast reflections and shadows, sometimes not. They were frightening but lacked sex appeal. In modern fiction, John Polidori’s The Vampyre (1819) paved the way for sex appeal. His vampire was fangless, sexually attractive and young.

In 1845, Malcolm Ryder introduced us to Varney the Vampire via the penny dreadfuls he published for two years. Varney’s look was hideous, white and bloodless, and he had fangs. Sex appeal? Only his hypnotic eyes qualified. 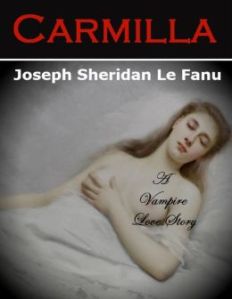 Sheridan Le Fanu wrote Carmilla in 1871. Carmilla had an “unearthly pale beauty,” fangs, and could be seen in mirrors. She also cast a shadow. She was overtly sexual with a penchant for the ladies, seducing them with her bite. Carmilla truly established the sexual standard for the most sensuous vampires today and is certainly a major precursor to Anne Rice’s Lestat and the others of his kind.

The best-known vampires these days include many properties of the classics, but they vary with each writer. Yarbro’s Saint-Germain only needs small amounts of blood to survive and his meals are often willingly provided by women who find him attractive. Like Dracula, he needs his native earth to survive, and Saint-Germain keeps a layer of dirt in his shoes that protects him from sunlight. Like his namesake, the historical Count Saint-Germain he is an alchemist, a scholar, and a gentleman.

Charlaine Harris’ vampires in The Southern Vampire Mysteries (aka the Sookie Stackhouse novels or True Blood for the TV series) claim to have a medical condition that is akin to photophobia and photosensitivity of the skin.  Extremely powerful, with stronger-than-human senses, they look normal, though they are pale and cold. These vamps can glamour humans. Their fangs are retractable. As a side note, the retractable fang debuted in 1967 when Barnabas Collins appeared on Dark Shadows. It’s now a common trait seen in Forever Knight, The Vampire Diaries, Lost Boys and Abraham Lincoln,Vampire Hunter, to name but a few.

Laurell K. Hamilton’s vampires have fangs, cast shadows, and have reflections. Although vampirism does not make her vampires unusually beautiful, many of the bloodlines in the novels happen to be very attractive ones. Hamilton’s vampires have skills such as heightened senses, immortality, and the ability to hypnotize. As opposed to the majority of most vampire fiction, Hamilton’s universe is unique in that her supernatural beings are common knowledge among the human community. This opens up interesting plot threads and allows topics such as equality to be addressed, giving the monster world an interesting likeness to real world problems. 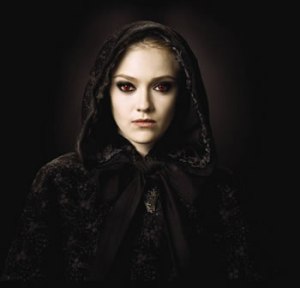 We would be remiss if we didn’t mention the popular vampires of Stephenie Meyer’s Twilight series. These vamps are magnificently beautiful, pale and cold. Their teeth are sharp and serrated but they don’t have fangs. The eyes darken and their bodies are nearly indestructable. They can tolerate sunlight but avoid it because it makes them, well, you know … we don’t even want to say it.

So, what about our vampires? Tamara Thorne did her own take on vampires in Candle Bay and Alistair Cross has just completed his new vampire novel, The Crimson Corset.

The Candle Bay vampires enjoy scenting food and drink, but only consume these things under the influence of a drug that Trueborn Julian Valentyn has created. (Julian is not human, but one of the few remaining true vampires left on earth. Most died out when Atlantis was destroyed.) The human vampires of Candle Bay are slightly pale and cool. They tend to be attractive, but this isn’t a rule. They breathe (when they want) and have sexual cravings that aren’t about blood. The terrible teenaged twins, Juicy Lucy and Poison Ivy, are forever under the influences of their 16-year-old hormones. While the vampires are stronger than humans and have better senses, they are full of human foibles.

Alistair’s vampires in The Crimson Corset are pale with marble-like skin, and are generally cool to the touch, depending on their most recent feeding. Similarly to snakes, these vampires secrete a venom that has different effects depending on the dose. In small amounts, the venom will heighten a human’s senses, and in large amounts it’s lethal, and will end the human life and bring about the transition into vampirism. In either case, any amount of venom creates a bond between the human and the vampire that turns the human into the vampire’s servant. The venom in this neck of the woods is highly addictive, making the human/vampire relationship much like the relationship between an addict and his or her dealer. These vampires tend to be attractive, though this is mainly because Gretchen VanTreese, master vampire of the bad guys, has a penchant for pretty things.

Our vampires are similar enough that we are able to have them be neighbors and interact in The Crimson Corset. For example, both the Candle Bay and Crimson Cove vampires are able to function, although sluggishly – in the day, so long as they avoid direct sunlight. Also, both our vampires have retractable fangs and require human blood to survive.  But although we have placed them in the same world, they do have some differences. 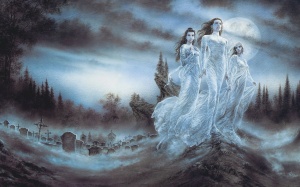 We’ve decided to collaborate on Candle Bay’s sequel so that our vampires can do some serious hanging out. The sequel concerns a road trip to Eternity, California where lots of vampiric families are getting together for a reunion. We’ll tell you more about that later, but we promise that you’ll meet many flavors of vampires!

As you can see, there are many variations of vampirism, and watching the evolution is a delight. Personally, we enjoy the ever-changing vampire-scape as it keeps things interesting, fresh, and inspiring. With all of these variations to choose from, it’s no wonder the vampire never dies.

All images retrieved from Google Search.

2 thoughts on “Vampires on the Brain”