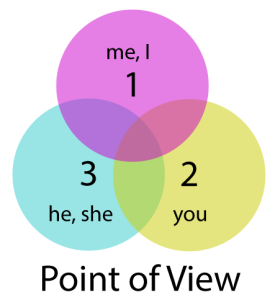 We’re nearly finished with the first volume of The Ghosts of Ravencrest and are already planning the next. We love Ravencrest because it allows us to stay current or to hop into history. Every lord of Ravencrest and his family has a story that plays into the tale of its current master, Eric Manning. Finding out what those stories are, what made his ancestors tick – and how this history affects our modern-day governess, Belinda Moorland – has become a game of literary Hide-and-Seek for us.

We couldn’t write these stories without shifting points of view.

Experiential differentiation is our thing. Imagine a red rose. To a young woman in love it reminds her of the bouquet she received last Valentine’s Day. It may bring a smile to a murderer’s lips because it reminds him of his last victim’s blood. If you’re writing an historical, an early Christian character may see the rose as a symbol of the wounds of Christ, or the blood of martyrs.

To a man with allergies, the rose is a hated bringer of sneezing, watery eyes and stuffed sinuses. To a jilted woman, it inspires fury because it reminds her of the man who left her at the altar. Someone else might avoid the rose because they dread the painful thorns. For a widower, it reignites great sorrow over the loss of his beloved wife who used to tend their garden. It makes him weep, so he tears the roses out. Or shoots himself among them to join her. But to the professional gardener, a rose might symbolize prosperity because where there are roses, there’s work.

And it doesn’t end with roses. To one little boy, a baseball bat might represent play and joy while inspiring dread and embarrassment in a less athletic child. To a grown man, it brings nostalgia, and to an abused housewife, abject terror. The rose may squirt water on an annoying mother-in-law, or a threatening bat might be foam rubber, turning tragedy to comedy.

In a mystery novel, knowing the differences in suspects’ feelings lends the detective more clues about the criminal. In a story of survival, individual knowledge about something most perceive as ordinary, may save a life.

Considering that such innocuous objects as a rose or baseball bat can inspire so many emotions, we’re like kids in a candy store when it comes to exploring the loves and fears, the prejudices and motives, of our characters. We want to find out what the baseball bats and roses mean to each character. And this is why we prefer the third person point of view.

We enjoy taking on viewpoints that are new to us. One of the most difficult things to do is to come from a point of view you don’t yet understand and when you attempt this, you either fall on your face or grow. For Tamara, the Prophet Sinclair in Thunder Road was a true growth experience. She saw him as a sleazy evangelist using his good looks and persuasive voice to grab money and bed women. But Sinclair insisted on growing and did something so foreign to Tamara’s own nature that to this day, she’s blown away.

For Alistair, coming from the perspective of Gretchen VanTreese in his upcoming novel, The Crimson Corset, was a major stretch, too. He had to learn to view the world through the eyes of a woman who uses sex (much of it creepy), manipulation, and murder to attain her objectives. 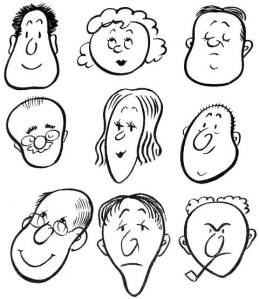 As confirmed character writers, we like rummaging around in different psyches, and as readers we prefer third person narratives for the same reason. That being said, a few of our favorite books have been written in the first person, leading us to believe that, when done well, this is a powerful and effective approach to storytelling… if that’s your preference.

It’s a matter of writing what you love, and we love multiple points of view. We’ve both written in the first person and found ourselves bored and switching to third.

In fact, when we began The Ghosts of Ravencrest, our initial intention was to stick to Belinda Moorland’s point of view, but immediately found ourselves itching to get into the heads of Mrs. Heller, Grant Phister, Eric Manning, and all the other characters we found so fascinating. If we’d maintained our original plan, we’d have grown tired of Ravencrest after one volume, but as it is, we have countless storylines to explore and we can’t wait to dig deeper into the myriad characters, both contemporary and historical, living and dead, who roam the halls of Ravencrest Manor.