In just a few days, THE CRIMSON CORSET will be available in paperback. For now, you can buy it in ebook format at Amazon. 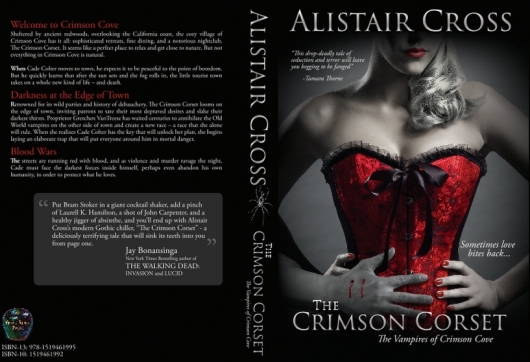 –Chelsea Quinn Yarbro, author of the SAINT-GERMAIN CYCLE and the CHESTERTON HOLT MYSTERIES

“THE CRIMSON CORSET is a good read. There is a colorful cast of characters, a clever plot, and an intricate structure … there are surprises and jumps and starts, sex and death, beauty and gore, something for everyone … if you are looking for set-up and pay-off, this novel will not disappoint.”

“This was an awesome read. Mainly because it kept me entertained and excited for the entire book. THE CRIMSON CORSET isn’t every other vampire book.”

“Falling somewhere between paranormal romance and vintage horror, THE CRIMSON CORSET is a tale of small towns, family ties, and vampires. Alistair Cross puts just enough of a spin on vampire mythology to distinguish his tale from the competition, and tells it with a slow-burning, subtle sort of flair that really pays off in the end …THE CRIMSON CORSET is one of those rare novels that manages to succeed across the board.”

“Put Bram Stoker in a giant cocktail shaker, add a pinch of Laurell K. Hamilton, a shot of John Carpenter, and a healthy jigger of absinthe, and you’ll end up with Alistair Cross’s modern Gothic chiller, “The Crimson Corset” – a deliciously terrifying tale that will sink its teeth into you from page one.”

“I couldn’t put this book down. It’s got more hooks than a day boat out of San Pedro Harbor!”

“Do yourself a HUGE favour – if you only read ONE horror/vampire themed book this year then be sure to make it THE CRIMSON CORSET by Alistair Cross. Horror lovers will adore its unashamed gore and graveyard humour and it has plenty of romance to satisfy paranormal romance fans who fancy a darker, Gothic inspired read … a tale that not only has a lot of bite but also plays with the readers’ emotions, in one scary, bloody and lust-filled ride!”