Now through New Year’s, four classic Tamara Thorne novels are on sale for only $2.99 a piece on eBook.

Haunted is the tale of horror writer David Masters who buys Baudey House, the most haunted  mansion in California. He and his equally skeptical daughter, Amber, are in for the ride of their lives when ghosts of mass murder victims from the 1800s and 1900s begin haunting them, and the succubus, Christabel, takes a very special interest in David. Click the pic to buy. 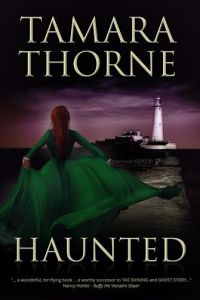 Moonfall is a murderous tale of witchcraft and mystery in a small apple-growing community famous for its Halloween celebrations and apple pies. But there is also St. Gertrude’s School for Girls, haunted and horrific, run by a mother superior with a Ph.D in discipline and keeping minors in bondage. Click the pic to buy.

Eternity is a thrilling whodunit that takes place in the northern California mountain town of Eternity. Newly transplanted sheriff, Zach Tully, finds himself in a snowy hell full of townsfolk as crazy as the residents of Shady Pines Sanitarium. There are two Elvises, Ambrose Bierce is the mayor, and the postmistress looks an awful lot like Amelia Earhart. And there’s a serial killer in town who claims to be Jack the Ripper… Click the pic to buy.

Candle Bay is the story of the vampiric Darling Family, who run the Candle Bay Inn nestled on the foggy California coast. The Darlings take what sustenance they need from sleeping guests and fine bottles of very red “wine.” Then trueborn vampire Julian Valentyn shows up with a bottle of addictive Elixir that allows the vamps to come out in the daylight … and plays havoc with their hungers. Click the pic to buy. 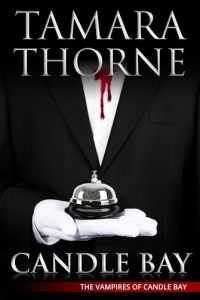