The Angel Alejandro is available for pre-order. Buy it today and have it directly sent to your Kindle on January 25th: http://tinyurl.com/z9mc5un 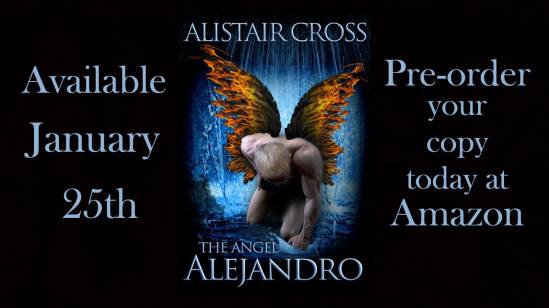 A Man without a Past
After a near-fatal accident, Madison O’Riley is faced with an astonishing problem: What to do with the man who saved her life. Naive and heart-stoppingly handsome, he calls himself Alejandro … and he has no memory of his past. As they set out to recover his lost identity, Madison realizes he harbors deep – and otherworldly – secrets that will shatter her understanding of reality … secrets that may put her in grave danger.
The Devil in the Details
And now, there’s another stranger in town. Gremory Jones has something for everyone, and for a small price, he’s willing to make a deal. By day, he walks the streets of Prominence in top hat and trench coat, tempting the citizens with nefarious wares from his shiny black briefcase. By night, he and his legion of insatiable acolytes corrupt the locals at Club Mephistopheles, a den of unholy delights housed in an abandoned church.
The Battle has Begun …
The townspeople are changing in outrageous and appalling ways and it’s up to Madison – with the help of a psychic, a local priest, and the new chief of police – to help Alejandro unlock his forgotten powers before an unspeakable evil tears apart the fabric of existence … and costs them their very souls …
#angels
#demons
#amreading
#pnr
#horror